Bloomberg News Hit Piece Reopens Question: Is the Press the Enemy of the People?

On September 4, 2018 Bloomberg News publish a story written by reporters Neil Weinberg and Polly Mosendz covering a rifle tournament in Talladega, Alabama sponsored by the U.S. Civilian Marksmanship Program, the US government public corporation chartered to carry on the mission of the former U.S. Army Directorate of Civilian Marksmanship by the Clinton Administration. They were accompanied by photographer Stacy Kranitz. 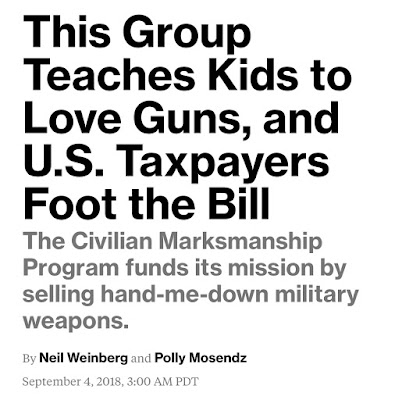 The article was, as would be expected from an organization of Michael Bloomberg, decidedly negative in it’s interpretation of the CMP’s mission questioning going into everything from questioning the motivations of President Theodore Roosevelt to implications that present day US taxpayers are footing the bill, which is untrue, the CMP draws no funding authorization from the US government general funds and relies solely on building an endowment fund from the sale of surplus rifles that, ironically, gun control advocates would just as soon scrap as worthless. This was clearly a hit piece op ed masquerading as news. Fine. Whatever. One expects this given the strong anti-gun bias of its namesake.

What was not fine is that this team of reporters failed to identify themselves to the event sponsors until they were discovered and confronted. And furthermore that Miss Kranitz took personally identifiable photographs of persons attending this event and failed to obtain the written permission to publish their images. Notice the captioning describing the persons in the photograph as men; something in these social justice warrior tribal pettiness times is code for “the enemy”.

Mr.Keith Schachle, purported in the article to have posed for a photo, reported later in the week on that he was to not pleased to see a portrait of himself in the article. On Facebook, now a seemingly more reliable source of facts and backstory than Bloomberg News, Mr. Schachle reported that “he turned around and there she was taking my picture”. The dour look on his face at that circumstance truly is “a picture saying a thousand words”, I’d wager to say a few of them four lettered. Another man, whose photo was taken from behind because of his t-shirt, which was obviously chosen by Bloomberg’s editors to cast him in a negative light, also reported being upset at “seeing myself” in the article. Neither man signed a release, according to their statements on Facebook.

Harmless? Apparently not. Bloomberg New’s implied character assassination of Mr. Schachle, who holds Distinguished Rifleman Badge, an honor bestowed to few Americans that is directly descended from President Roosevelt’s 1903 marksmanship initiative, as well as a High Master classification in the sport, manifested later in the week when a derogatory meme based on the widening viral ridicule of Colin Kaepernick surfaced featuring Mr. Schachle’s likeness.

Other persons on Facebook who were at the shooting tournament where this incident occurred reported that these reporters were intrusive and interfered with the match; which quite honestly speaks highly of the tolerance of gun owners, and armed ones at that. I mean, can you imagine if a Fox reporter snuck into an Antifa gathering and was outed?

The truth of the matter is that shooting, and high-powered rifle target shooting in particular, is one of the safest sports to participate in both from an inherent safety and athletic injury rate perspective. It’s a sport based on calm, deliberate, focus to accomplish degrees of marksmanship skill. And it’s a sport that is, thanks to the social media infrastructure of Mark Zuckerberg’s Facebook, a community where everyone is probably no more that two degrees of separation from anyone else. This is not a faceless impersonal mass of humanity like Manhattan Island. Shooters know each other worldwide. This is a grassroots community that literally is behind every blade of grass.

Come on Bloomberg News, it’s 2018. The print and tv media know their industry is already rapidly being dis-intermediated by the Internet and this powerful force called social media that WILL identify anyone, anywhere on this planet and nearby space within hours of it appearing. What were your editors thinking not telling those reporters to get permissions or get bent? That’s just sloppy workmanship in this day and age. I’ve worked with reporters many times on many things. This was a total bonehead move; something that should have been caught before those photos were approved.

Adding salt to the wound, CMP officials who commented briefly on Facebook noted that they were unaware of the presence of Weinberg, Mosendz and Kranitz until attendees at the tournament complained about the reporters activities. Quite honestly, it’s a tribute to the CMP that they granted them interviews instead of informing them that any material collected prior to their identifying themselves is off the record, being told to please leave the property immediately, and contact a public affairs representative at another time for any further inquiries. Bloomberg News got lucky catching nice people being far too nice to a hostile press incursion. This will probably never happened again and, because of Bloomberg News, all other news organizations who might have a future legitimate need to cover the shooting sports will suffer because of these three reporters’ unprofessionalism.

Bloomberg News would do well to (1) remove all identifiable images that do not have properly signed releases from their article, (2) seek out and apologize to the persons that have been maligned, and (3) discipline the reporters involved for their breaches of journalistic ethics and the reputational harm they have caused to Bloomberg News and the rest of the press.

So here’s a silver lining thought for the media. Bloomberg News has a chance to prove what CNN White House correspondent James Acosta implored President Trump and his staff to consider, to make a proper gesture to Americans who are already wary of the media that the press is not the enemy of the people. Remember how many papers ran coordinated editorials asserting the the press is not the enemy? All that coordination and hope for legitimacy? Well with this incident, Bloomberg News is not helping lend much credibility to that case. Perhaps the rest of the media will chime in and remind them that there is this thing called journalistic integrity. Maybe Mr. Acosta himself should make that point on his network.

I’d be happy to discuss it.

Note: As part of preparing this article, permission to use Mr. Schachle’s name and likeness were explicitly requested and granted in proper journalistic fashion … via Facebook.

Posted by Dennis Santiago at 12:31 AM