Tricked out match guns are fun but, if you want to prove that you've got an eagle's eye and steady hands, the Formula One test is the Civilian Marksmanship Program's As-Issued Four Gun Aggregate. 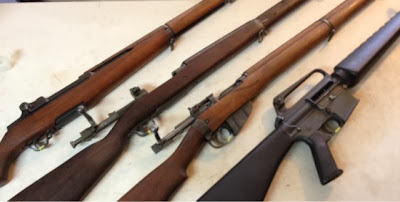 4-gun is the combination of one's scores shooting a series of CMP John C. Garand 30-shot Course A's at 200-yards on NRA SR targets at one of the CMP Regional Games or the Nationals officiated by the CMP.  These are the only places you can earn the coveted neck ribbon CMP achievement medals.

You will need four as-issued rifles.  The first is the M-1 Garand who's inventor the course of fire is named for.  This remarkable battle rifle will test your prowess at slow prone, rapid prone and offhand. The match winner will put almost all bullets into a saucer.

You do get to hear that classic ping when the en bloc clip ejects with this gun. :)  It's a good idea to write your firing point number on your hand for each match because you will move around over the course of the tournament. 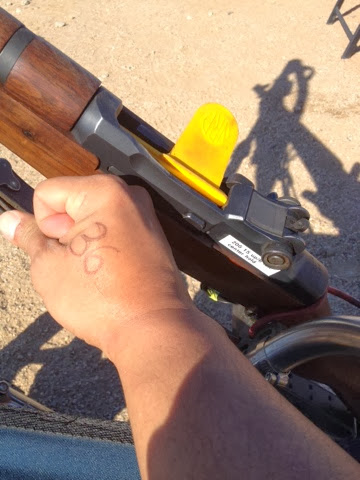 Next comes the hyper accurate 1903 Springfield. You can use either the WW I M1903 or the later WW II M1903A3 model with peep sights. A Springfield will typically shoot groups half the size of an M-1 with the same ammunition. Think potential in terms of tea cups instead of saucers.

The drawback with the Springfield is that the sight adjustments are cruder so you need to know how to favor that last bit of hold off in your sight picture to nail that pinwheel X.  It also introduces bolt manipulation skill and stripper clip reloading into the rapid fire stage.  Lastly, you are doing your trigger control through what is essentially a Mauser pattern military field trigger. 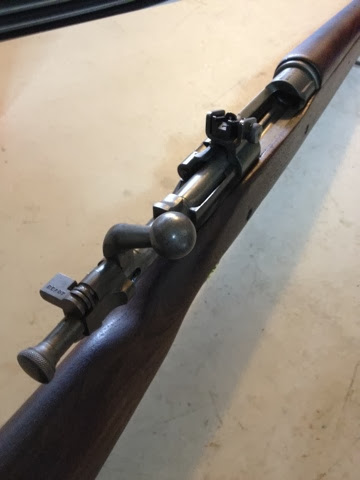 Next, up the degree of difficulty by removing the ability to adjust windage.  This gets you to Vintage Military Rifle with WW II and earlier machines designed to bombard enemy formations and trenches en masse; a form of warfare that predates the age of gunpowder. You'll see all manner of rifles from all over the world here. The big favorites are Sgt. York's M1917 Enfield and the Swedish 6.5x55 Mauser. The British SMLE and greater Mauser families are also present as are the very accurate Russian Mosin-Nagants and Swiss K-31's. One will even see the occasional Krag come to the line.  They are all as-issued and ready to race the Grand Prix once more. 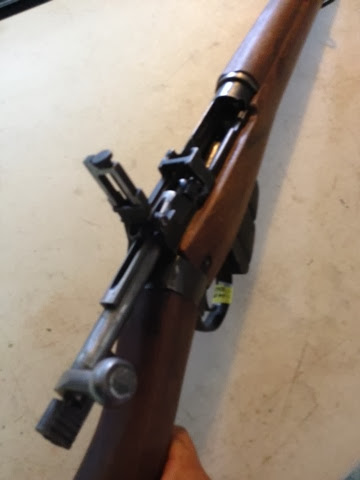 Last of the four is the newcomer.  This used to be a 3-gun aggregate. CMP added the As-Issued Modern Military Rifle to the series.  The rule book provides for many models but the gun of guns for this phase is the 1960's Vietnam era pencil barrel, triangle hand guard, 1-12 twist, A1 carry handle sights Eugene Stoner AR-15 pattern rifle.  Slick side even better.  Feed it 52 gr. BTHP's and try your best to shoot cleans.  Do not crank on the sling like a modern free floated lead weight laden Service Rifle.  It won't work.  You have to be even more careful with most other foreign military rifle models. 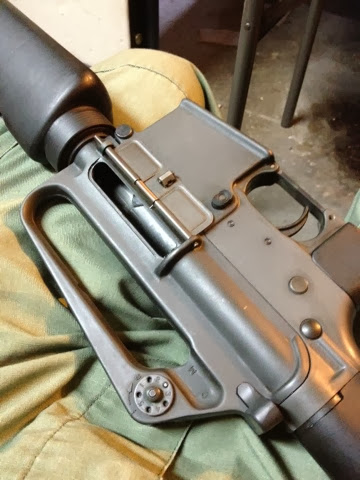 Can it shoot?  You betcha!  97-3x rapid taken through a spotting scope.  Note the happy face from the guys in the pits.  My slow prone stage was a 99-4X.  Those Mattel specials can hammer. 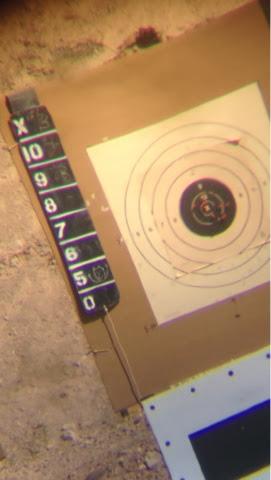 These regional CMP Games matches are a gathering of the shooting family from far and wide. It's a level playing field for all using essentially the same stock guns, ergo like Formula One racing.  The winner truly is the marksman who makes the fewest mistakes over the next 72 hours.

But far more important, it's a learning experience and a connection to the true meaning of expected skills the predicate clause "well regulated" really stands for.  As in skating, before one competes in freestyle, one must qualify in the compulsories. This is it.

Note: I didn't get my fourth trinket in four gun in 2013.  My SMLE - well its ammo maker (me) - made a mistake, the subject of another blog entry of its own.  The fourth medal in the above photo is from a separate CMP M-1 Carbine match.
Posted by Dennis Santiago at 1:45 PM